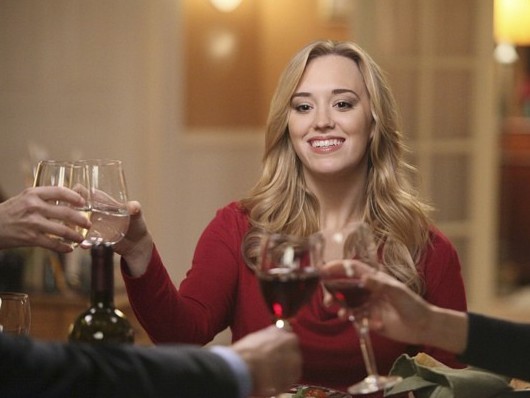 Titre VO
Is This What You Call Love ? 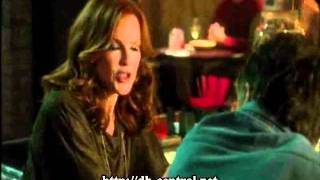 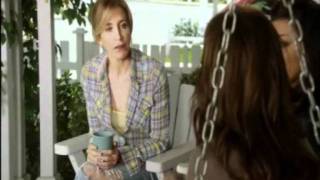 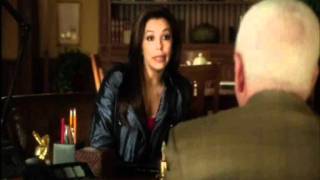 Lynette scores a second date with Frank even though the first one was a total disaster. She invites him home for dessert not realizing that's actually date-speak for sex. This little faux pas leads Lynette to lure Frank up to her bedroom at the start of their next date. We later learn that Lynette started crying right in the middle of things. That's because she finally realized that her marriage is over.

Lynette tells Renee that Frank was very understanding. He said all the right things before he left, but she doubts she'll ever see him again. DING DONG! Someone's at the door. It's Frank. He comes bearing pizza. Frank figures the pop-in date takes away the pressure that goes with formal plans. He's also willing to take things slow. Lynette has other ideas. They'll get the pizza at some point, but they decide to have dessert first.

Juanita is bummed when she doesn't get a Valentine's card from a boy she likes, so Gaby creates a fake one from him. This inspires Juanita to plant an unwanted kiss on her clueless sweetheart. A short time later, Gaby is called to the principal's office to be lectured on the school's zero-tolerance policy for sexual harassment.

Gaby fesses up about the fake Valentine. Juanita is understandably upset because she thinks her mom always lies to her. A prime example of this is the fact that she doesn't even know where her father is. Gaby realizes that Juanita isn't a little girl she can easily fool anymore. After the two of them have a little chat, Gaby brings her daughter to the rehab facility to visit her dad.

Julie's back! Susan's long list of mother-daughter activities for the two of them gets ditched the moment she sees that Julie is six months pregnant. The baby's father is a non-factor. That's just one of the reasons Julie has decided to give the baby up for adoption. The prospective new parents want to meet her mom to learn more about her background. Susan agrees to the meeting even though Julie's decision is breaking her heart.

The folks who want to raise Julie's baby are perfect. Susan is incredibly supportive until Julie is out of earshot. Then she starts telling tales of how her daughter has a history of mental illness to go along with all the times she was in jail. Susan blames herself partially since she liked to drink lots of wine while she was pregnant. This onslaught of bogus info sends the prospective parents heading for the hills.

Julie is furious. She goes on a nasty rant as to how much of her childhood was spent taking care of her mom. Susan is devastated. Mike makes Julie realize that everything she ever did was done for love. Mother and daughter have a heart-to-heart, but Julie still wants to stick with her decision to give up her baby. It's going to be a girl, by the way.

Bree is still drinking up a storm and bringing home a different guy every night. She's had sex with so many men that she doesn't even recognize a guy she'd already slept with. That doesn't stop her from taking him home again. A mystery figure is still spying on her from the inside of a car as she continues her downward spiral.

When Susan, Lynette and Gaby learn that Bree is drinking again, they stage an intervention. It doesn't go well. Bree confesses that she wanted to kill herself and her "friends" are partly to blame. They abandoned her the moment things got rough. Lynette, Susan and Gaby promise they are there for her now, but Bree isn't hearing any of it. Her friends are at a loss.

Bree hits the bar once again. She's not interested when a slimy, vile guy tries to pick her up. But this particular gentleman caller won't take no for an answer. He swipes Bree's keys and tries to force her into his car. Things are looking bad until help arrives in the form of Orson. You heard us. Orson is back, too!

A jolt of electricity from Orson's stun gun sends the vile guy scurrying away. He tells Bree that her friends called him because she's in trouble. Bree says, "Orson, I've made such a mess of my life." This doesn't sound like a problem to her former hubby. Orson says, "Don't worry, dear. The one thing you and I were always good at is cleaning things up." Nice.