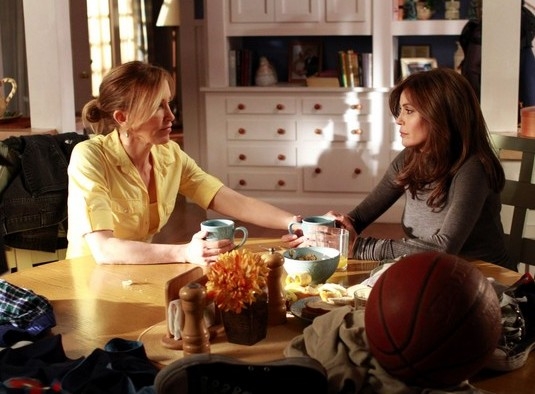 Titre VO
Get Out of My Life 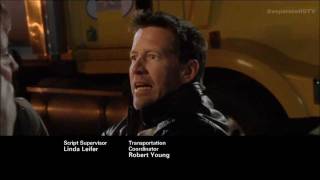 Lynette's surprise at seeing Preston and Porter pull into the driveway turns into a full panic attack once she realizes they have luggage with them. The boys were evicted from their apartment. They need a place to stay. Lynette tries to lock the doors, but the twins deftly play the "children of divorce" card to finally gain access to their new/old home. Later, they overhear Susan telling their mom about Julie's pregnancy.

Susan hears Julie making plans to meet the father of her baby at a coffee shop. She does a stakeout to learn that her baby's baby daddy is Porter Scavo! Susan is horrified until she realizes that he wants to keep the baby. If Julie doesn't want the kid, he'll raise her by himself. Susan offers Porter her full support. The first thing he'll need her to do is break the news to his mom.

Lynette takes the baby news in stride. Wait, no she doesn't. She completely freaks, especially when she learns Porter intends to raise the baby solo. Lynette tries to make her son understand that he's not ready to be a father. Porter doesn't disagree. But he vows to do whatever it takes for his daughter. He says, "She's not even born yet and I can't believe how much I'm dying to see her." In other words, he loves her. He really, really loves her.

Gaby catches sight of a depressed Roy sitting on a bench at the park. Karen kicked him out. Gaby can only ignore his hints for a place to stay for so long. Roy would have asked Bree, but there's no room now that Orson has moved in. This is news to Gaby. She heads over to get the scoop, but Orson steers them away. As for the Roy situation, Gaby is pleasantly surprised at how well her new houseguest keeps Juanita and Celia in line.

In an effort to keep Roy around, Gaby sabotages his plans to beg for forgiveness from Karen (who also wants to make peace). Roy's depression grows. He thought he'd finally found the one who will be there to hold hands with him at the end. Karen is also sad. Her cancer has returned and metastasized to the brain. She's somewhat relieved that Roy is out of the picture. He had to watch his first wife get sick and die, so she feels it's for the best that he doesn't have to go through it again.

BOOM! An explosion at the construction site almost kills Mike, who is shocked to learn that Ben is the one who caused the blast. He was trying to blow up some equipment to collect insurance money to pay off the loan shark. Things go from bad to worse for Ben when he's admitted to the hospital with chest pains.

Mike brings Renee up to speed on how dire things have become with the loan shark. She heads down to the hospital to offer help, but Ben refuses to take her money. He wants to get out of this situation on his own so that he can propose again honorably. Renee pays off the loan shark without Ben's knowledge, but we get the sense the situation with this creepy lowlife is not over.

Bree tells Orson about the incident with Alejandro. She's amazed that he still believes in her. Bree's also considering Orson's suggestion to move to a coastal cabin up in Maine. He leads her to believe her friends have truly abandoned her, though he's the one who has been keeping them at bay through deception.

Speaking of deception, Orson has become a master of it. Once he learned how to drive, he made some changes in his life. Flashbacks show him watching Bree from afar. He was there the night she and her friends transported Alejandro's body to the woods. We learn that Orson is the one who has been leaving those mysterious notes in Bree's mailbox as part of his master plan. Guess we'll soon see how the rest of it plays out.