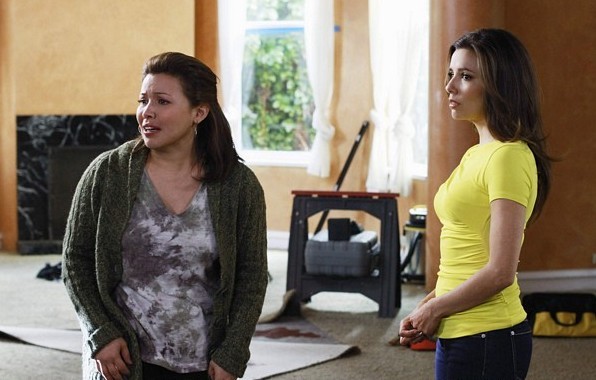 Titre VO
What's the Good of Being Good 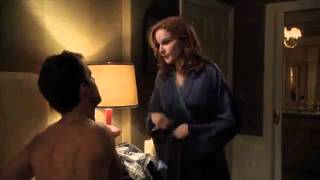 Lynette is ready to get back into the dating scene. She wants Gaby and Renee to set her up with someone. That may not be an easy thing to do since their friend is just so "feisty." Renee reluctantly helps orchestrate a date for Lynette with her hair stylist, Frank. The dinner conversation takes a bad turn when Lynette starts working out a five-year plan for Frank's career on a cocktail napkin. Like we said, she's feisty!

Frank exacts revenge on Renee for her role in his disastrous dinner date by giving her a super-frizzy hairdo. She looks like an extra from Foxy Brown. Lynette is unapologetic for trying to help a man advance his career. The problem is that the guy never asked for her help.

Renee covers up her new do for her big date with Ben where he actually gives her an engagement ring. She accepts and admits that she never thought she could trust someone again after her first marriage. Ben gets a first class of the guilts. He fesses up that he only wanted to marry her because of his current financial woes. Ben says he does love her, but there's really no way for Renee to know that now.

Lynette realizes she needs to make some changes. Renee suggests yoga since it helped her quit smoking in college. Maybe there's room for two on that yoga mat, as Renee could use something to take her mind off her recent breakup. As for Ben, he ends up taking money from that loan shark Mike ticked off awhile back. The hooligan warns about not missing a payment. He also makes an unsettling veiled threat regarding Renee.

Alejandro's current wife, Claudia, shows up on Wisteria Lane looking for her husband. She believes Susan is having an affair with him. That's why she posts fliers all over the neighborhood calling Susan a home-wrecker. Actually, she calls her a somewhat more R-rated name, but that's neither here nor there.

Susan reveals to Gaby that she wasn't Alejandro's only victim. Claudia's daughter, Marisa, was also molested. Gaby tries to tell Claudia the truth about the monster she married, but nothing gets through. Outside, Susan tells Marisa that keeping this secret only makes things worse. Claudia didn't want to believe Gaby, but knows it's the truth when she hears the story from her daughter.

Claudia thanks Gaby for letting her know the truth about her husband. Alejandro will never hurt Marisa again. Claudia is sure of this once she sees the blood stain on the rug Gaby was having pulled up during a renovation. She really should get rid of that thing sooner rather than later.

Bree has been making her way through most of the men in Fairview. She shuffles them out the door in the wee hours of the morning so the neighbors won't judge her. That plan falls apart when Mrs. McCluskey sees a naked guy getting dressed on her stairway. She also notices the open bottle of wine on the table.

Reverend Sykes tries to pull Bree out of the dive bar where she's been picking up her legions of men. He knows this person before him isn't his most proper parishioner. When Bree refuses to leave, the rev has no choice but to remove her as leader of the women's auxiliary. That means she'll miss out on the upcoming bake sale. Or does it?

Bree downs several glasses of wine before showing up at the bake sale with a tasty dessert. She dishes out sweet treats to the parishioners, one of whom happens to a married man she picked up at the dive bar. This is a completely awkward situation for everyone but Bree. She no longer cares what others think of her. That's why she has no problem making out with a strange man on her front porch in full view of all the neighbors.