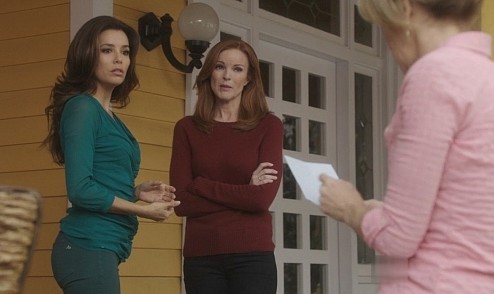 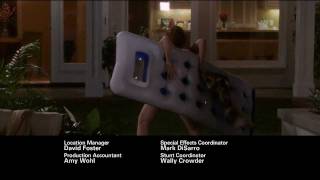 Bree shows Gaby and Lynette the letter she received in her mailbox with the words "you're welcome" written inside. They still have no idea who could have possibly sent the note. Bree leaves in a huff when her friends wonder why she's the only one receiving these messages. She has no idea someone is watching her from a car across the street.

Susan finally arrives at Alejandro's house, but she has no idea how to actually get inside. As luck would have it, a realtor arrives to escort her in for an open house. She meets Alejandro's wife, Claudia, who is having serious money problems. Susan feels sorry for the woman, so she cuts her a big check for some Legos that belonged to Claudia's daughter, Marisa. Hey, they're collectibles!

Susan notices the uneasy look on Marisa's face at the mention of her stepfather. Out of Claudia's earshot, she promises Marisa that this bad man will never hurt her again. Later, Marisa tells her mom what Susan said. Claudia wonders how this stranger could possibly know such a thing about her husband. It's a good thing she has Susan's name and address on that check should she ever want to find out.

Ben blows off Renee as he tries to deal with some money issues. Make that "lack of money" issues. Mike realizes something is up with his boss when his latest paycheck bounces. Ben is actually desperate enough to consider taking money from a loan shark. Mike talks him out of it, much to the loan shark's chagrin. He later mentions that Renee is loaded. Soon Ben is making nice with his previously-dissed girlfriend, though we fear it may not be for the best of reasons.

With Carlos still in rehab, Gaby recruits Lynette to teach her some fundamental business principles so she can be his proxy to woo a big client. The two get into a somewhat heated argument that ends when Lynette kicks Gaby out of her house. Come meeting time, Gaby uses a list of business buzz words to get through the first part of dinner. But things go south fast when the waiter swipes her cheat sheet.

There's a problem with a flickering light in the kitchen of the Scavo house. With Tom in Paris, Lynette takes matters into her own hands to resolve the electrical issue. It doesn't go well. Her kids want her to call an electrician, but Lynette is determined to resolve the problem on her own. It's a complete disaster.

Lynette later admits to her kids that she would have asked Tom how to do all this stuff if she'd known that he would "really" leave her. Lynette and Gaby make nice when they realize they are both on their own at the moment. Well, that's not exactly true. They still have each other. They also really miss the men they married.

Renee tries to get Bree to ditch her repressed ways by taking her out to a dive bar. Things are pretty rocky until Bree meets Bradley, a nice guy who snuck away from his high school reunion. After lots of wine, Bree goes skinny dipping with Bradley at his lavish home. Actually, the lavish home belongs to Bradley's boss. Bree learns this the hard way when the guy comes home unexpectedly.

Bree complains about her disastrous night with Bradley. Renee doesn't think the story is all that bad. In fact, she believes that her friend had a blast. Bree admits that it was actually quite exhilarating. She heads out to that same dive bar and picks up another guy in record time. Again, she has no idea that someone is still watching her from a car across the street.