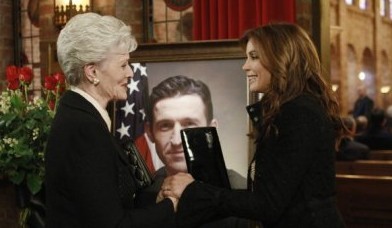 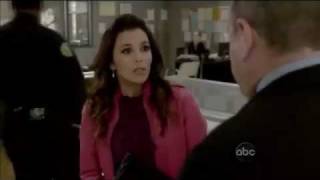 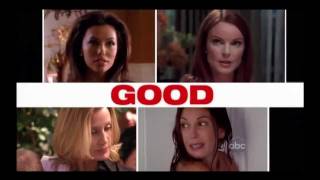 The situation looks dire as Bree writes out her suicide note on embossed stationery, of course. There's knock on the door just before she pulls the trigger of her gun. It's Renee. She thinks Bree is there with Ben, so she kicks in the door. Renee quickly realizes the real issue at hand when she sees the loaded gun on the table. This spurs her to move in with Bree and remove any household items that could be used to commit suicide. She also gets rid of Bree's shower curtain, but only because it was ugly.

NEWSFLASH! Fairview police detective Chuck Vance is dead. The housewives think they are in the clear until they begin wondering if someone killed him on purpose. Gaby lies to say Carlos couldn't have done it because he's still in rehab. He's not. Gaby snoops around the police station. They don't know much, but they do know Chuck's death was no accident.

Carlos has no recollection about what happened after he left rehab. A cop at Chuck's funeral says Carlos came into the station in a drunken stupor babbling about beating someone with a candlestick. Gaby helps him get out of this sticky situation. Later, she tells him she loves him. Gaby also warns that if he ever goes to the police without checking with her first, she'll be burying another body in the woods.

Susan can't figure out why she's still so depressed about the entire Alejandro situation. She eventually realizes it's because he got a phone call as they were putting his body into the ground. That means he has a family who has no idea what's happened to him. That's why she needs to go to Oklahoma City to see if they are okay.

Tom is still fuming about the fact that Lynette is a co-conspirator to murder. He promises to get her out of this mess. He spills the news to Bob just in case they need an attorney. This was before he knew Chuck was dead. Guess they won't need Bob after all. He's still going to bill them for the hour though. As for Lynette, she's so grateful to Tom for staying by her side. She invites him over for movie night with the kids.

It's nice to have so many members of the Scavo family in one place. But Lynette gets a little upset when Tom brings home pizza. After 23 years of saying she likes thin crust, she'd hoped it would finally occur to him to get it. Things like that make her feel like she doesn't matter. Tom then apologizes for comparing Lynette to Jane, who is waiting for him in Paris. Lynette suggests he go to her, but Tom would like to stay to watch the movie first.

Bree doesn't want to confide in Renee because she doesn't consider them to be friends. That's not going to stop Renee from keeping an eye on her. She doesn't want to relive the pain of watching someone commit suicide like her mom did. Bree knows that Renee saved her life. She says, "I realize that makes you the best friend I'll ever have."

Bree and Lynette make a chart of people who know about the Alejandro situation to help them determine who may have killed Chuck. It could have been the person who wrote the initial letter. And it could be an unknown figure represented by the big red question mark on their chart. That's probably the same person who just left another note in Bree's mailbox with two little words, "You're Welcome."