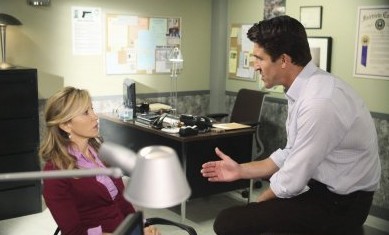 Titre VO
Putting It Together 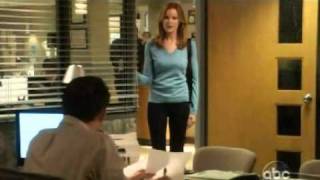 Bree's still hitting the bottle pretty hard as her friends are called down to the police station by Chuck for an unofficial chat. First up is Susan. Chuck wants to know why she created a painting of four friends hovering over the grave of a dead man. Excellent question!

Chuck shows Susan a picture of a missing person named Ramon. The man in the photo is actually Gaby's dead stepdad, Alejandro. Susan denies knowing the guy. Lynette does, too. Chuck tries to bully her by suggesting that the secret she's hiding is the reason her marriage fell apart, so Lynette slaps him. Chuck moves on to Gaby. He suggests that her hubby's drinking problem is the result of an event that may have triggered a need for alcohol.

As for Bree, she's busy drowning her sorrows at a bar. Feeling friendless, she joins a trio of ladies who are celebrating the birth of a new baby. Bree orders a bottle of champagne for the table. She has no idea who these women are. She's just desperate for some friendship. She even calls one of the ladies Lynette. As you may have guessed, that's not the woman's name.

Ben shows up at Bree's the next day to let her know that she knocked on his door at two in the morning in a drunken stupor. He suggests reaching out to whichever one of her friends hates her least. That probably won't be Renee, who catches sight of Bree giving Ben an innocent hug. Chuck adds fuel to Renee's fire when he suggests that Bree is Ben's girlfriend. The irritating homicide cop also plans to shut down Ben's construction site when he learns the missing person's cell phone sent a signal from that spot.

Gaby is afraid Chuck is going to contact Carlos. She had said the drinking was triggered because her cad of husband had an affair. Gaby sneaks into his rehab facility but gets roped into a counseling session with a family she doesn't know. Unbelievably, her lies actually help a kid admit he has a real problem. Gaby eventually gives the Chuck scoop to Carlos, who is angry about being unable to do anything about the situation while in rehab.

Lynette is desperate to talk to Tom before he jets off to Paris with Jane, so she tracks down her hubby in an airport restroom. She blurts out the news that she's an accessory to murder. Tom is still processing this info when Jane steps in to see Lynette. You know, the symbol on the door clearly indicates the bathroom is for men only! Needless to say, Jane is upset. She's still going to Paris, just without Tom.

Gaby lets Bree know that the only reason Chuck interrogated them is to exact revenge on her. The only way to stop what's happening to them is to stop Chuck. Bree offers to sign whatever confession Chuck wants to write up under the condition that he leaves her friends alone. No deal. Chuck truly enjoys seeing Bree in pain.

Susan is thrilled when Felix Bergman shows up with a compensation check for her paintings. But the little art man also comes bearing a proposition about a move Susan to New York City where she has a chance to be a legitimate artist. Susan actually considers the idea. After all, what is keeping her on Wisteria Lane? But if Susan goes to New York, New York, she'll have to make it there without Mike.

Chuck keeps digging until he discovers that his missing person is actually Gaby's stepfather. Gaby then learns that Carlos checked himself out of rehab. Later, Renee catches sight of an out-of-sorts Bree driving away in her car. As for Chuck, he's leaving a threatening voicemail message for Bree when… BAM! A car runs him down. Chuck lies motionless in the middle of the street as the unseen driver speeds away.

A short time later, Bree checks into a seedy motel. She takes a seat at a table where she pulls two items out of her bag. The first is a bottle of wine. The second is a loaded gun. Bree chats with a vision of Mary Alice. She tells her old friend that she's so unhappy. But is Bree desperate enough to do what Mary Alice did all those years ago when we first met our housewives? Looks like we'll have to wait a little longer to find out.