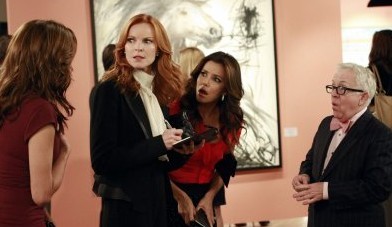 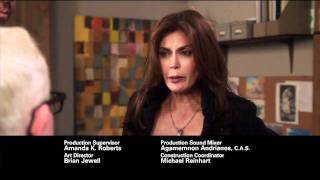 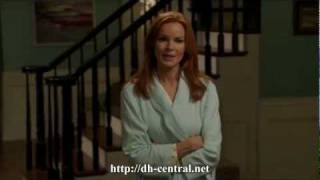 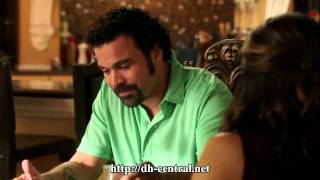 Bree calls the police when she hears a strange noise in her house at night. She comes downstairs to discover that the police are already there. Unfortunately, the cop standing before her is Detective Chuck Vance. The guy is still doing his best to intimidate Bree, as he believes she's protecting a friend. That much is true. As we all know, Bree would do anything for her friends. More on that later.

Carlos is still drinking up a storm. Gaby convinces him to stay home from work while she takes care of things at the office. One of the company's biggest clients, Frank Sweeney, isn't happy. Gaby goes into full flirting mode to try to placate the guy. But Mr. Sweeney is more impressed with Geoffrey, the Senior Account Manager. After the client leaves, Gaby confides in Geoffrey about her hubby's drinking. Geoffrey promises to cover the office while Gaby takes care of things at home.

Carlos informs Gaby that Geoffrey is a backstabbing snake who is trying to steal the company's clients. She burst into the office to confront snake boy, who promptly blabs about her hubby's drinking problem in front of Mr. Sweeney. The client wants to see Carlos right away, but not for the reason you might think. Sweeney is a recovering alcoholic who wants Carlos to go into rehab before he loses everything. His words seem to get through, as Carlos later dumps a bottle of booze down the drain.

While meeting with a client, Lynette remembers that it's her wedding anniversary. She and Tom have been married for 22 years. When the client learns about Lynette's woes, she tells her about how she made some changes when her own marriage was on the rocks. Later, some flowers are delivered with a note that reads "Love always, Tom." Woo hoo!

This latest development inspires Lynette to sport a brand new hairdo and sneak into her hubby's apartment to leave a bottle of scotch on his nightstand. Unfortunately, Tom doesn't come home alone. Jane is with him. Lynette hides under the bed, but springs back up once things look like they are about to get hot and heavy. Awkward!

Tom has had standing order with a florist to send flowers to Lynette on their anniversary. He apologizes for the mistake and promises it will never happen again. You can see the sadness in Lynette's face when she hears him say this. Before she leaves, Tom remarks that he likes her hair. But Lynette still can't shake her sadness. She later removes her wedding ring which now has us feeling very sad, too.

Andre introduces his art dealer to his class. He's a persnickety little man named Felix Bergman. Susan refers to him a "little ball of hate." She's an excellent judge of character, but Felix is an excellent judge of art. He loves Susan's painting which happens to feature four ladies hovering over a dead man in an open grave. Bergman wants to show her work in his gallery. Uh oh.

There's no way Susan wants any of her dead guy paintings to be shown in public. She tells Andre this, but he doesn't listen. He sets up all of Susan's incriminating pieces on a wall at an art gallery opening. Needless to say, Susan is horrified. She desperately tries to rip her painting off the wall. Felix believes her antics are all part of a publicity stunt. He loves it!

Susan calls Bree and Gaby. She tells them to bring their checkbooks so they can buy all the paintings. Felix demands $10,000 for the whole set. Deal! The paintings can now be removed. But they don't come down soon enough. Chuck followed Bree to the gallery. He's no art connoisseur, but that doesn't stop him from formulating a theory about Susan's work. Not good.

Both Susan and Gaby are upset with Bree because she didn't tell them about how close Chuck has been getting to the truth. Bree was doing it to protect them, but that strategy has obviously backfired. This has her feeling very alone. It also has her wanting a drink. Where's that Sweeney guy when you need him?