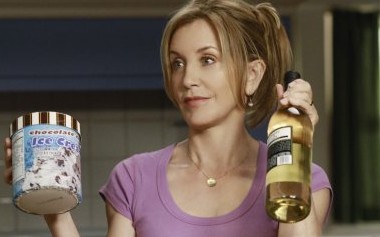 Titre VO
Watch While I Revise the World

Susan is having trouble sleeping. Carlos, too. They end up taking a late night stroll together. Mike gets suspicious when he catches them acting chummy. He's also not thrilled to learn his wife must do community service after Carlos had to pick her up from the police station. Mike doesn't mind Susan being friends with a guy. It's all the secrecy that has him upset.

Carlos joins Susan during her community service project. When they catch sight of Mike driving by, the guilt-ridden friends hop into the back of a van. There's never been anything adulterous happening between Susan and Carlos, but the close quarters they suddenly share gives them pause for thought. The two old friends quickly snap out of it. They step out of the van where Mike greets Carlos with a fist to the face. Ouch!

Bree thinks Chuck wrote the "I know what you did" letter. She needs to be sure. While snooping through her handsome police detective's briefcase, Bree comes across a photo of her hand and a sealed envelope bearing her name. Gaby thinks Chuck may have been trying to match her hand to a print they found at the crime scene with the photo. Now they just need to know what's in that envelope.

Chuck tucks the envelope inside his sports jacket as he and Bree head out for a dinner date. Gaby follows them to the restaurant where she puts her pickpocket skills to use by swiping the mystery envelope. She meets up with Bree in the restroom where the contents of the envelope are revealed. Bree is shocked to see an engagement ring. The picture of her hand was obviously taken to measure her ring size. Whew!

Susan and Carlos finally come clean to Mike about what's really been going on between him. They tell him about the killing and how the girls helped cover it up. As you can imagine, Mike is speechless. Then he's gone. As for Bree, she has no choice but to dump the detective before he proposes. Chuck doesn't take the news well. In fact, he gets quite angry. He warns her that she has made a very big mistake. Uh oh.

Lynette's relationship-challenged sister, Lydia (guest star Sarah Paulson), is a changed woman ever since she got engaged to a swell, spiritually-centered fellow named Rashi. As you may have guessed, Lynette doesn't want her sis to marry this guy. The two sisters get into a wicked verbal smackdown. Rashi is shocked when he catches sight of his fiancée in a new unattractive light. Suddenly, their relationship is on the rocks.

Lynette tracks down Rashi at a meditation retreat. She explains that the Lydia he witnessed only emerges when the two of them are together. Rashi, who is really Herbert Brickmeyer of Long Island, says the scene he witnessed reminds him of the insanity of his own family. The two have a heart-to-heart and Rashi takes Lydia back. As for Lynette, she wonders if she can possibly change like her sis did.

Renee agrees to help Lee's daughter, Jenny, shop for a bra. The two of them bond during their trip to the mall. This has Lee feeling like he's been left out in the cold. Renee has even been helping Jenny with her math homework by explaining how fractions can help you divvy up a divorce settlement. Who says she doesn't have motherly instincts?

Lee has a bit of a blow up after Jenny starts spending all her time with Renee. It's like she has a mother now. Lee is crushed to hear his daughter use the "M" word. He worries that he and Bob aren't enough. Renee dismisses that notion. Jenny went from being bounced around foster homes to getting two great parents who love her. What else could a girl want ?