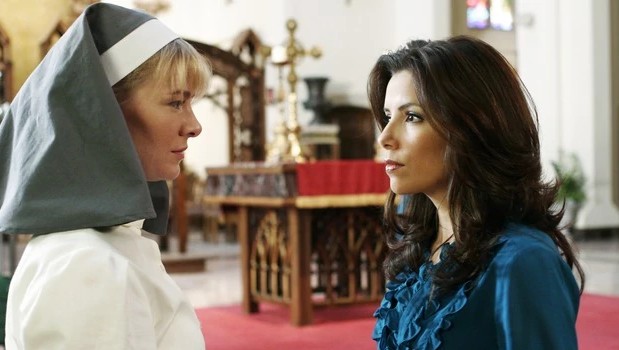 Titre VO
There's Something about a War 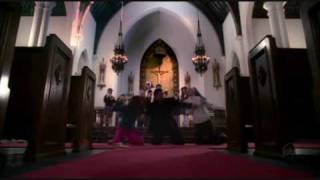 Edie is watching a war movie on TV while eating a dessert.

"If there is one thing Edie Brit understood, it was the nature of war."

Karl walks in, drinking a beer, and sits down next to Edie.

"After two failed marriages and countless rocky romances she had learned that love was a battlefield, and the easiest way to survive the carnage was total surrender."
Flashback - Edie's HouseEdie: "You know, I was thinking a vacation to Rome will be so romantic."
Karl: "Vegas is cheaper."
Edie: "Oh."Flashback - Edie's HouseEdie: "Could you put your underwear in the hamper?"
Karl: "Can you do it? You’re standing right there."

Edie is in the living room where she's looking at a menu.

Edie: "I've got a hankering for Chinese food tonight."
Karl: "I’m so over rice. Let's do pizza."

Edie throws the menu in the trash.

Edie and Karl are on the couch.

"But the day comes for every soldier when she must take a stand."

Karl changes the channel to a game.

Edie gets up and goes to her bedroom.

"You see, when it came to men, Edie had a battle plan all her own."

Edie comes downstairs and clears her throat. Karl turns and sees Edie wearing a see through nightie. She has silk scarves in each hand.

Edie: "You got five minutes for Edie?"

Later, in Edie's bedroom, Karl is nearly naked, lying on the bed. His hands are tied to the bedposts.

Edie slinks out of the room.

Edie goes downstairs. She takes the whipped cream and puts it on her dessert.

Edie switches the TV back to her movie. From the bedroom, Karl yells out to her.

Edie is sitting on the couch, watching her movie, eating her dessert, which is now covered with whipped cream.

"She also knew to the victor go the spoils."
Karl: "Edie! Edie!"Opening CreditsOutside Betty's House"The guest bedroom on the second floor of the Applewhite house had the best view in all of Wisteria Lane."
Betty's House"From its windows, one could see from Mike Delfino's house on end of the street all the way to the old Huber place on the other. But unfortunately for the room's newest guest..."

Matthew tapes newspapers to the window.

"...the view was about to change. Dramatically."

Matthew comes downstairs. Caleb is sitting at the bottom of the steps hugging a blanket and pillow. Betty enters and sees Caleb.

Betty: "What on earth is he doing out?"
Matthew: "Caleb, go up to your room. Mom and I gonna have a talk now."

Betty: "His room? Have your lost your mind?"
Matthew: "Relax, I've taped newspapers to the windows. People can't see in."
Betty: "Caleb, get back down here."
Matthew: "No, no! We had a talk. It's fine. He understands what's gonna happen if he's discovered."
Betty: "For five seconds he understands and then he forgets. You know that."
Matthew: "We can protect him without treating him like an animal."
Betty: "I am keeping him safe from the police, from the Fosters, from himself."
Matthew: "He is not going back downstairs."
Betty: "Since when do you talk to me like that?"
Matthew: "Since I share the risk."